It took over 10 years for the coach to get the school he was at to enter the competition. When he was at Ezamukhanya Junior Secondary School back in 2009, his principal did not believe that the kids would be able to compete in such a high-profile tournament, and when he came to Nomandi Primary in 2011, again the principal did not believe the kids had the capabilities to enter such a tournament.

So Wandile took a different approach to persuade the principal to believe in him.  He put a soccer team together at the school and persuaded the other schools in the area to do the same and they began playing friendlies against each other. He managed to get the entire area more attuned to soccer at under-12 level. His focus was to teach the kids the rules of the game as well as different tactics as well as the technical aspects of the game.  He knew that finally the sport will gain momentum in the area and, as they say, change is inevitable.

Finally, in 2016, he was given the green light to go ahead and the school entered the Danone Nations Cup. “At first we were amateurs,” said Qobisile. “We didn’t even have proper kit to play in. The players weren’t comfortable playing against other schools at this level and we never made it past the cluster phase of the tournament.”

So, he went back to the drawing board. “Soccer is about setting goals, accepting defeat and being able to bounce back and most importantly trust in your team,” Qobisile said. “In 2017 we entered the tournament again and I soon noticed that the other teams had improved. I knew I had a good team, but I underestimated the opponents. I realized then that every year is a new experience completely. You play against different schools, different teams, some change coaches and so they play a completely different game.

“Once again, we didn’t get past the cluster phase, but the experience I gained excited me and, this year, I was ready to put the next group of youngsters to the test. I realised that I needed to apply what I had learnt by watching last year’s games. Well, it has worked, and we are going to the provincial finals! I know that I still have a lot to learn and I then must transfer this knowledge to my youngsters. That’s what is so exciting about this tournament.  Obviously we would love to play in the national finals, but the Danone Nations Cup is also about learning, having fun and fair play.”

As for Qobisile himself, he played street soccer and school soccer but has no formal coaching qualification, but he has a diploma in teaching and has an advanced certificate in life orientation from Unisa. He also attended a refereeing workshop which has helped a lot with his coaching.

The key player in the team, he believes, will be Bayanda Yomithi, the left back. “He is a focused player and a good motivator, I’m expecting a lot from him,” Qobisile said.

The provincial finals won’t be easy, but the team is well organised this year and they have as much chance as any of the other seven teams to get through to the national finals, he believes.

“The Danone Nations Cup is a very prestigious tournament. Since we have been entering the tournament people in the area are paying attention to us, they encourage us to do well.

“The principles of the Danone Nations Cup are important. I teach my players to believe in their dreams. We like to live by the Danone philosophy which is to pay attention to health and nutrition. Danone’s mission is to bring health through food to as many people as possible, an important lesson for kids to learn and it will become a lifetime practise.” 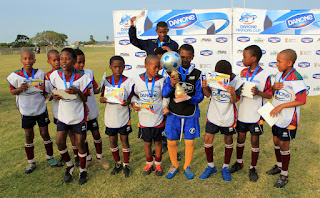 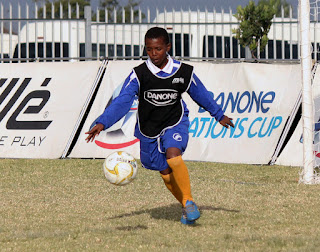 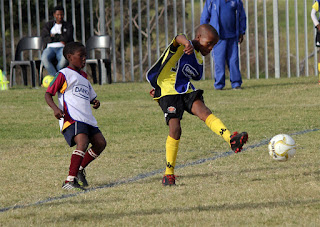 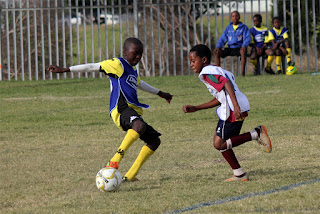 Schools from the JPSFA competed in the Danone Nations Cup for the second successive year with 21 schools entering and it was hosted by St David’s Marist Inanda again.

“This is very exciting and something completely different for our team,” said St David’s coach, Thami Nkabinde, who has a FIFA coaching certificate that he obtained in 1994 and renewed through the JPSFA in 2004.

“It was a tough competition,” said the coach. “We saw some great soccer and the tournament was very well organised. The players particularly enjoyed the NutriDay and Yogi Sip products that they were given over the three days.  The calcium and vitamins are so important in keeping energy levels at optimal level as the boys played more often than they are used to each day.”

On the second day they beat Sacred Heart College 4 - 1 in their first game. “The boys really communicated well, and their team work was excellent,” said Nkabinde.  “It is important that the players understand that team work, as opposed to showboating as individuals,  is what wins games in soccer.  Their accurate passing and making use of spaces as well as utilizing the full field managed to win us the game.”

This camaraderie and team work continued in their second game against Emmarentia Primary School and they won the game with the same margin of victory, 4-1.

The final day they beat the Northwest Christian School 1-0 to top their group and qualify for the semi-finals. “We played Fairsand Primary School in the semis and they cracked under the pressure,” Nkabinde said. “Their communication was poor, and we beat them 3-1.”

That took them into the final against Heronbridge College. “Heronbridge were strong and would have been worthy champions,” Nkabinde said. “We scored twice, but they pulled one back and it seemed like an equaliser was imminent and it was going to go to penalties, however my boys managed to hold on until the final whistle.”

Nkabinde was impressed by the support of the parents at the games. “It was amazing, it would be great if all parents could attend matches and support their children,” he said.

And now the boy’s dreams have come true and they are off to the provincial finals.  “We have no idea what we will be up against, but we have heard from Reddam, who were last year’s winners, that it is going to be tough as the schools registered with the South African Schools Football Association (SASFA) are very experienced in the tournament and have exceptional talent.  We will keep to our game plan and put in a couple of extra training sessions and extra games to ensure we are ready for 25th August.” 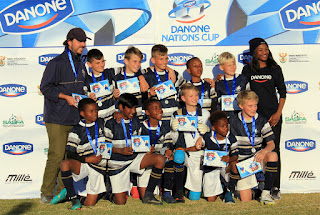 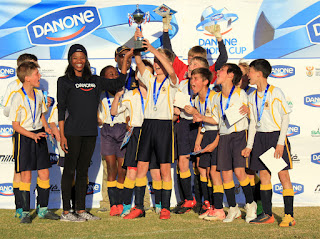 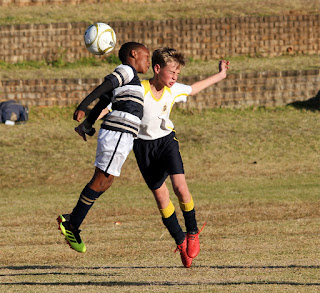 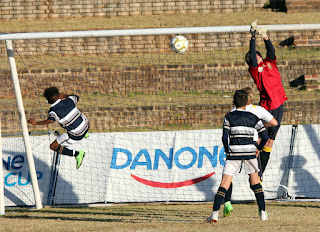 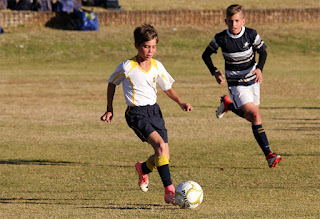 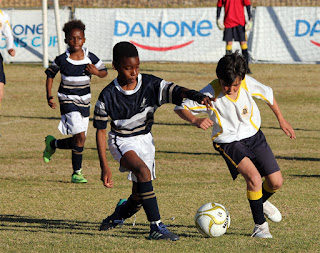 The under-12 Danone Nations Cup KwaZulu-Natal provincial finals take place at the Sugar Ray Xulu Stadium in Pinetown on 28th July, with 12 districts sending their winners to qualify to represent the province at the national finals in Gauteng on 15th September.  The ultimate winner will compete in the world finals in Spain in 2019.

The school representing the Umzinyathi District is Lewis Combined based in rural Msinga. This will be the second year in succession that they have reach the provincial finals under coach Siyabonga Xulu, who is also the sports coordinator at the school.

“Last year we never made it past the group stage and we are looking forward to the tournament this year and hoping to do better,” said Xulu, who has no formal coaching qualifications, but did play varsity soccer at University of KZN under coach, Mr Sapula, who was his inspiration and role model throughout his tertiary study years.

“Mr Sapula taught me so much about soccer; how to analyse players and opponents and how to make changes to your team to improve the entire game,” he said. “Soccer is a team game and you have to play as a team. It’s important to ensure that players are in the correct positions to suit their play and that they blend and synchronise well. At this young age that is critical. It helps them to feel comfortable and enjoy the game.”

The provincials will be tough for Lewis as a school from a very rural area competing against the winners of much bigger districts who have a lot more experience.

The boys are currently on holiday but Xulu knows that they, like him, will be watching the World Cup intensely. “I’m observing the different styles of play of the different countries and seeing how comfortable the players are on the ball,” he said. “The World Cup inspires kids to play better and encourages them to dream big.”

Xulu believes his strength is in his ability to study the opposition and create a game plan that takes advantage of the skills of his players. “Our opposition are in for a surprise,” he said. “I know I will also learn a lot from the other coaches at the provincial finals. I’m particularly interested in the coaches from the Pinetown area where there is good infrastructure to assist the schools.”

Nutrition is extremely important for the children to remain healthy. Lewis is a Quintile 1 school, meaning that most of the parents do not work and it is in a very poor area. The school has its own vegetable garden that is maintained by the pupils. “It teaches them the importance of developing healthy eating habits and gives them nutrition that helps them to be more focused during classes and on the sports field,” Xulu said.

The school has a supportive principal in Bhekumuzi Linda. “He is very involved at the school and very encouraging and caring of the learners and the soccer team,” Xulu said. “I can rely on his support.”
Xulu thanked Danone for giving coaches a wonderful opportunity to use soccer to inspire the youth and to teach them life skills. “Danone really cares for the youth,” he said.” These boys come from different backgrounds, some are from very disadvantaged homes and others are less disadvantaged. They earn to respect each other. no matter what background they come from.”

While he doesn’t want to single out any players, there are two who are mature and confident and hold the team together, communicate well on the field and motivate the rest of the team. He will be relying on them at the finals.