The prestigious Coca-Cola® Hero of the Day award is presented on each day of the tournament in recognition of a game changing ‘hero’ moment.  Willie was selected for the award by a Coca-Cola appointed panel of cricket experts after he took a huge risk by declaring early and going for an all-out win after his team had lost on the first innings in his match against Mpumalanga.

In declaration games, a team can win on the result of their first innings but if there is enough time they can bat a second time and win the game outright. The second innings only consists of 5 wickets a side.

Mpumalanga batted first and scraped to 119 runs against a very strong Northerns lineup.

Northerns would have fancied their chances of winning the game but instead lost wickets quickly and found themselves at 58/9 when Willie decided that he had already lost on the first innings but he can still win the game.

Willie declared on 58/9 letting Mpumalanga bat again, his bowlers responded very well by reducing Mpumalanga to 51/5. Northerns needed 112 to win the game in 10 overs. Northerns put on a good show but after they lost two wickets they decided to bat out their overs.

“We thought that we batted badly in the first innings and that we are better than 58/9, so if we declared early and bowled them out cheaply we could show them exactly how well we can really play and knock off their lead to win the game. It nearly worked out for us but unfortunately we did not leave ourselves with enough overs to win the game.” said Willie.

Willie Ludick is now in line for the accolade of Coca-Cola® Hero of the Tournament which will be announced at an award ceremony on the 20th December 2015. 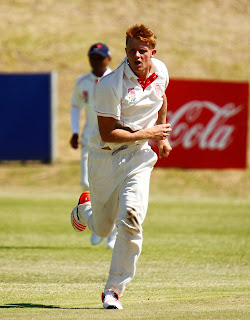 The prestigious Coca-Cola® Hero of the Day award is presented on each day of the tournament in recognition of a game changing ‘hero’ moment. Dylan was selected for the award by a Coca-Cola appointed panel of cricket experts after he took a spectacular catch to dismiss the Coca-Cola U19 batsman Wiaan Mulder from Gauteng when he was on 41 and was beginning to score freely and take the score away from the Free State.

“We had just came back from a drinks break, my captain put me at short cover to stop quick singles. We needed to stop Wiaan Mulder and Farhaan Sayanvala who were building a large partnership that was beginning to take the game away from us. Sean Whitehead bowled a ball that was misjudged by Wiaan and I stuck out my hard hoping to take the catch. Next thing I know the ball stuck and Wiaan was out. I was ecstatic, it was a perfect time to take a wicket. Unfortunately it was not good enough to win the match.’ said Dylan.

Dylan Aucamp is now in line for the accolade of Coca-Cola® Hero of the Tournament which will be announced at an award ceremony on the 20th December 2015. 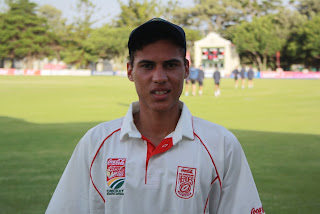 Unlike the previous game where the kids always looked like they were going to win, this time the game was a close contest between the two team.

The Proteas players were always under pressure but brilliant batting from Denisha Devnarain and Farhaan Behardien helped the Proteas score 48. Minenhle Notbela was the kids best bowler taking 2/3 in his over.

The game went to a super over and the kids batted first. The kids had an amazing super over scoring 11 runs. The Proteas only managed to reply with 8 runs in their over.

The man of the match was Minenhle Ntobela thanks to his 12 runs and his 2 wickets for 3 runs. 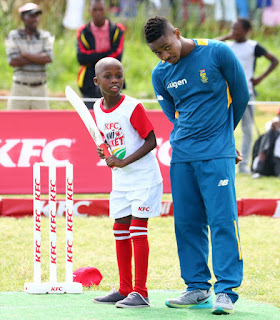 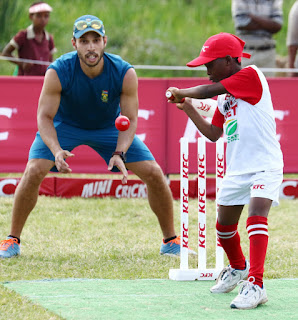 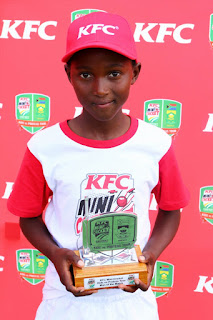 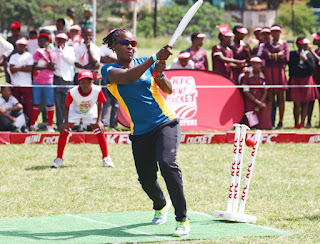 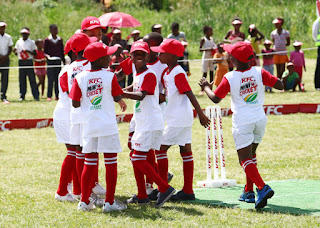 Speaking at Mgada Primary School after surprising them with a training session, Proteas Legend and KFC Mini-Cricket coach, Mfuneko Ngam, was beaming after his team’s win in the Eastern Cape and can’t wait for game two in Kwa-Zulu Natal.   “We really uncovered some amazing talent in Mthatha, my KFC Mini-Cricket kids put on a brilliant display against the Proteas.  Come game two we are looking to keep the momentum going before I hand over the reins to my fellow KFC Mini-Cricket coaches Graeme Smith and Neil McKenzie,” said Ngam.

Mike Middleton, Chief Marketing Officer for KFC South Africa added, “The standard of cricket and the level of talent uncovered at Nomandi Junior Secondary school in our first KFC Mini-Cricket Kids vs Proteas Tour game really encapsulates what KFC Mini-Cricket is all about.  At KFC we take pride in the fact that we are able to get kids active and bring them closer to their cricketing heroes.  I wish to extend my congratulations to Mfuneko and his side on their stellar performance in Mthatha and I wish him and Mgada Primary School good luck for game two in Durban.”

The match between Mgada Primary School and the Proteas, taking place in Umlazi, will be the second in the four game KFC Mini-Cricket Kids vs Proteas Tour, with game one having already taken place in Mthatha and with further games taking place in Johannesburg and Cape Town.  In addition to Mfuneko Ngam, KFC have also signed-up legendary cricketers Neil Mckenzie and Graeme Smith who will also serve as KFC Mini-Cricket coaches during the Tour in Johannesburg and Cape Town respectively.

After the Proteas’ loss in Mthatha, Proteas bowler Wayne Parnell was impressed by the Eastern Cape KFC Mini-Cricket side and is looking to get his team back on track come game two.  “We were outplayed in game one but we are ready for Mgada Primary School and will be looking to level up the series in Durban. The kids from Nomandi were really on their game in Mthatha.  There are some amazingly talented young players in their KFC Mini-Cricket side and I can’t wait to follow their progress closely over the coming years.”

The Proteas play Mgada Primary School at the Comtech Hub field at Comptech Combined School on 24 November at 13:00. The event is open to the public.  Come down and support Kwa-Zulu Natal’s KFC Mini-Cricket kids and get closer to your heroes, the Proteas.

Two spaces are still up for grabs for your primary school’s or cricket club’s KFC Mini-Cricket team to host and take on the Proteas.  Dial *120*7535# or visit www.kfcminicricket.co.za now to enter.

About the KFC Mini-Cricket Kids v Proteas Tour
For the third year KFC will run a national competition where KFC Mini-Cricket kids will stand the chance to play against the Proteas in the KFC Mini-Cricket Kids vs Proteas Tour
Kids can enter online (www.kfcminicricket.co.za) or via USSD (*120*7535#)
The winners will be rewarded with a prize handover, a training session and a game against the Proteas, all assisted by one of the three KFC Mini_Cricket coaches, Graeme Smith, Neil McKenzie and Mfuneko Ngam.
The runners-up will be given the opportunity to participate as ball boys and girls at a televised Ram Slam T20 Challenge match in their area
Three third place winners will be drawn, each of whom will be awarded with 25 KFC Mini-Cricket sets for their school.

KFC has recently renewed its Mini-Cricket sponsorship for a further 10 years, taking the partnership through to 2025 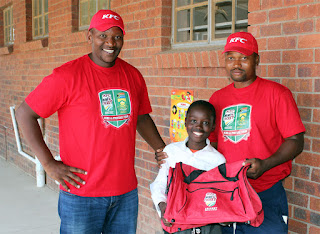 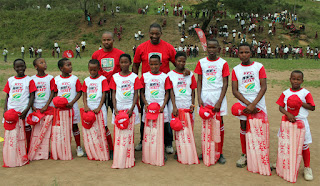 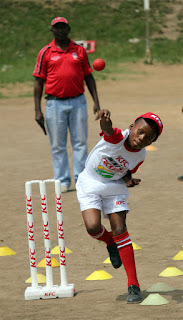 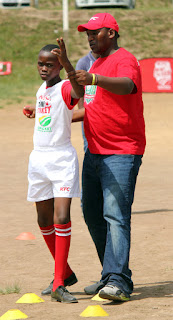 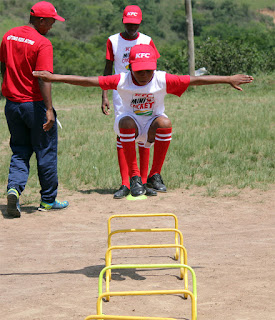 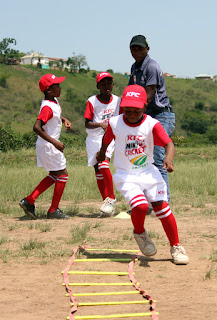 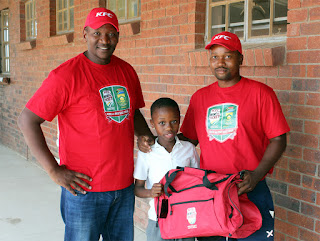 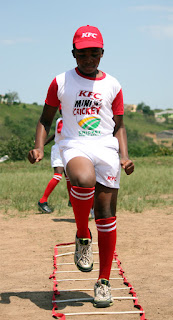 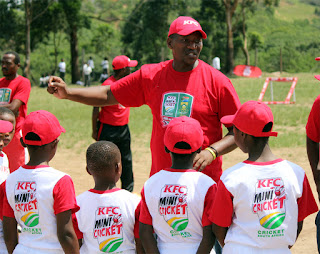 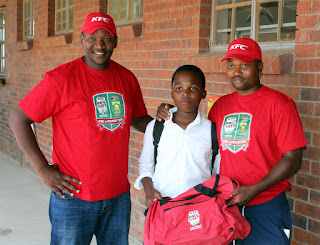