Easterns KFC Mini-Cricket coach, Basid Umarjee, is attending today’s KFC T20 International, and will form a part of the post-match presentation ceremony, in recognition of his commitment to the KFC Mini-Cricket programme.

Basid uses KFC Mini-Cricket as a platform to identify and develop raw talent in underprivileged communities such as Actonville near Benoni.

Having grown up with a similar background to most of the kids he works with, Basid understands the challenges these young players face in their day-to-day lives.

Basid always kicks off his coaching sessions by telling his KFC Mini-Cricket kids a bit of his life story.  He does this with the aim of showing the kids that he has had similar experiences to what they are currently going through and that if they learn persistence and dedication, they can also have a future in cricket

Basid is also an accomplished cricketer.  He has been coached by Geoffrey Toyana and played club cricket with Hashim Amla.

He is grateful that KFC Mini-Cricket is able to give him a platform to not only teach local kids cricketing skills but also valuable life skills. 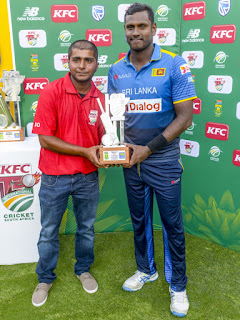 The opening match, which featured an on-form Proteas team going up against the KFC Mini-Cricket stars from Kimberly Islamic School, was one of the most tightly contested games in the Tour’s history. The Kids put up a real fight as they chased the Proteas’ 63 run total, taking the game right to the last ball and narrowly losing by just 2 runs.

Despite their defeat, Proteas legend and KFC Mini-Cricket coach, Graeme Smith, praised his team for giving it their all. “I’m so proud of the KFC Mini-Cricket kids.  They played like real champions and fought until the end against a Proteas side that has been on top form. They have some serious talent in their ranks and I look forward to seeing them further develop their cricketing careers.” said Smith.

The KFC Mini-Cricket kids from Fleur Primary School will be looking for a come-back victory when they go up against an on-fire Proteas team at Supersport Park in the 2nd Tour match. Smith’s successor, Neil McKenzie, who will be temporarily stepping away from his role as Proteas batting coach to lead the KFC Mini-Cricket kids will be doing his best to help them achieve their aim.

McKenzie, who took a training session with the kids at their school ahead of their big encounter with the Proteas said, “I’m so excited to take on the Proteas together with the Fleur Primary School kids. We are very aware that the Proteas have been playing some great cricket of late but we will give it everything we’ve got and hopefully level up the series. I’ve seen some serious flair in this team and I have no doubt that we can give them a good run come Friday afternoon.”

Proteas batsman, Hashim Alma, who was part of the star-studded Proteas team that won at Newlands, commented his team’s chances for the upcoming match. “Game 1 was a tough encounter for us.  Considering how close the game ended up, we were not only pleased but relieved to come away with a win.  We’re expecting another tough encounter in Centurion when we take on Fleur Primary School, but we’re confident that, with the help of our home crowd, we will deliver a great performance,” said Amla.

Fleur Primary School is the second school to step up to the crease and take on the Proteas in the 2016/17 KFC Mini-Cricket Kids vs Proteas Tour. The teams will do battle at Supersport Park Centurion on 20 January 2017 at 15:00.

Mike Middleton, Chief Marketing Officer for KFC South Africa concluded, “If game 1 was anything to go by the 2016/17 KFC Mini-Cricket Kids vs Proteas Tour is going to be the best yet! Kimberly Islamic School were given the chance to not only meet their heroes but to challenge them on the field of one of the world’s greatest stadiums.  This however didn’t overawe them.  They put on a heroic display and did us proud.  I am certain that Fleur Primary will equally give it their all when they get active at Centurion.  I wish them and coach McKenzie the best of luck!”
Your primary school or cricket club’s KFC Mini-Cricket team still stands a chance to take on the Proteas in the remaining two Tour matches. Dial *120*7535# or visit www.kfcminicricket.co.za now to enter. 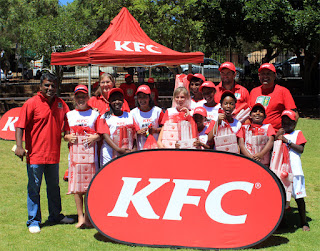 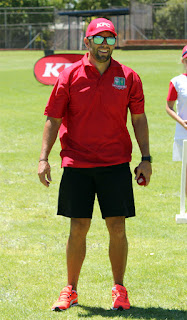 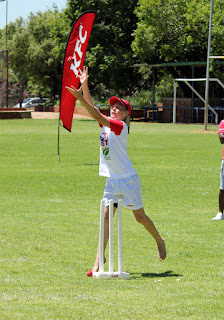 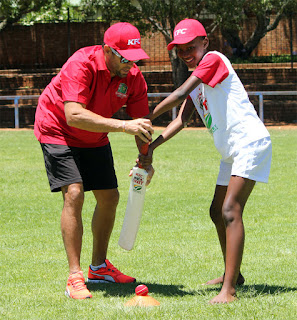 The match was one of the most closely contested in the history of the tour with the Proteas finally winning the game by 2 runs.

The Proteas put on a reasonable score of 63 thanks to a couple of big shots from Kagiso Rabada.

The kids were always in the game but never ahead of the Proteas in the run chase. The game came down to the last three very exciting balls of Hashim Amla’s bowling.

Hashim Amla bowled the last over with the kids needing very few runs to win. Hashim initially bowled well and the kids needed to get 12 runs off the last three balls.

Hashim bowled a no-ball and due to a midfield behind the stumps, the kids managed to run an extra 5 runs.

With two balls to go the kids needed 3 to win and Hashim managed, to the relief of the rest of his team, to bowl two dot balls to win the game. 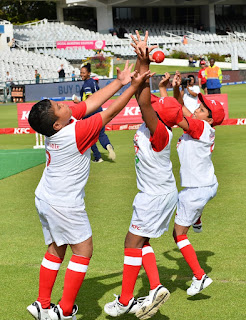 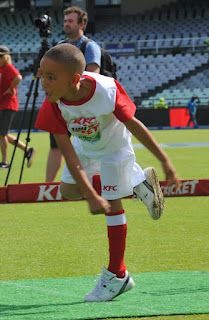 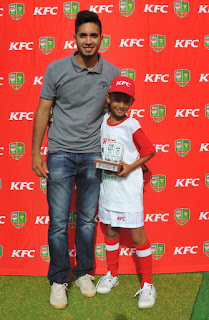 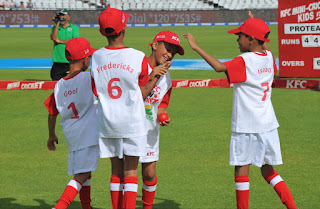 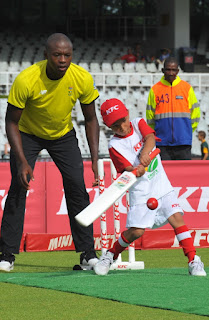 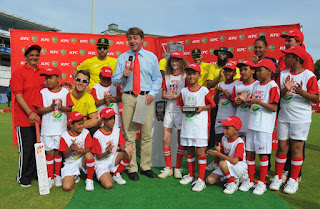