THE BIGGEST TOUR OF THE SUMMER WRAPS UP IN CAPE TOWN

The KFC Mini-Cricket kids, who will be represented by St Andrews Primary School from Saldanha Bay, will be looking to claim a historical series victory over one of the best limited overs sides in the world.  The Proteas, who will be represented by ICC T20 World Cup squad memebers Kagiso Rabada, David Miller, Imran Tahir and Rilee Rossouw, will be looking to level-up the series after their Duckworth-Lewis victory over the kids in Gauteng.

Former Protea and South Africa’s most successful captain, Graeme Smith, will be taking over from compatriots Mfuneko Ngam and Neil McKenzie as coach of the KFC Mini-Cricket team. After his  first training session held today with the team at St Andrews Primary, Graeme spoke of his pride in the kids, “Win or lose, the KFC Mini-Cricket kids should be immensely proud of their performances this season.  To go up against the Proteas and be in a position where, going into the last game, they cannot lose the series, is an amazing achievement.  As a team we cannot wait for the game and I have full confidence that it will be the KFC Mini-Cricket kids holding the trophy aloft come Thursday afternoon at Newlands.”

The Proteas will be looking for a win in the final game as a momentum builder ahead of a key period in their season which includes KFC T20 Internationals against England and Australia before heading to India for the ICC World T20.

Star Proteas bowler Kagiso Rabada commented, “The KFC Mini-Cricket kids have been tough opponents this season.  We definitely won’t be underestimating them on Thursday.  The Proteas have had a brilliant time taking part in the KFC Kids vs Proteas Tour and we can’t wait to follow the progress of the KFC Mini-Cricket kids. ”

About the KFC Mini-Cricket Kids v Proteas Tour
For the third year KFC will run a national competition where KFC Mini-Cricket kids will stand the chance to play against the Proteas in the KFC Mini-Cricket Kids vs Proteas Tour.
Kids can enter online (www.kfcminicricket.co.za) or via USSD (*120*7535#).
The winners will be rewarded with a prize handover, a training session and a game against the Proteas, all assisted by one of the three KFC Mini_Cricket coaches, Graeme Smith, Neil McKenzie and Mfuneko Ngam.
The runners-up will be given the opportunity to participate as ball boys and girls at a televised Ram Slam T20 Challenge match in their area.
Three third place winners will be drawn, each of whom will be awarded with 25 KFC Mini-Cricket sets for their school.

KFC Mini-Cricket provides a platform for kids in South Africa to have fun and get active.

There are currently over 110 000 kids from over 4 900 schools active in the KFC Mini-Cricket programme who are coached by over 8000 volunteers.

KFC has recently renewed its Mini-Cricket sponsorship for a further 10 years, taking the partnership through to 2025. 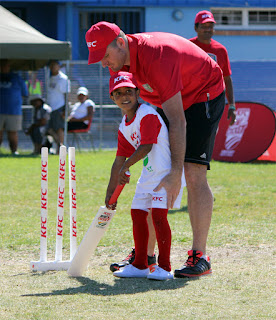 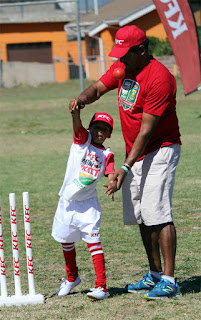 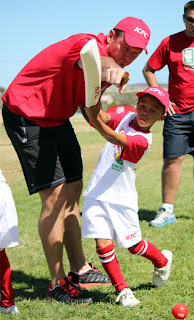 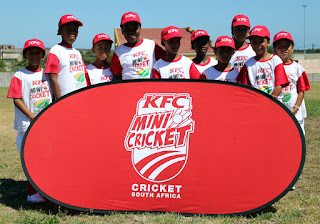 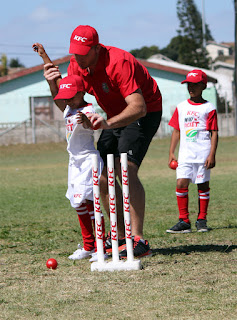