Millé, a leader in technical sportswear, will be taking Elias Marosane from BM Mokitime Primary School in North West province to France in October to attend the Danone Nations Cup world finals.

Marosane coached the under-12 school team that narrowly lost to Benny’s in a penalty shootout in the national finals of the competition in Reiger Park in June and was chosen by a panel of judges to accompany the team to France as an observer.

The panel of judges that made the winning decision was led by scouts from Sundowns, who attended most of the provincial finals and were present at the national finals.  In contention were the coaches of the other eight provincial champions (Benny’s are already going as champions).

Marosane was chosen based on his ability to mobilize his team on and off the field of play, his calm exterior which is important to kids this age as they must be able to handle pressure, especially when games don’t go their way, his use of the field and positioning of players, team structure, discipline and his motivational skills which were all impressive.

The trip has come about courtesy of Millé, a partner in the Danone Nations Cup competition.

The World Finals will take place in Paris, France from the 14th – 16th October. The package includes travel, accommodation, meals, accreditation to all three days of games and a couple of excursions to experience some of the local culture.

He will also watch player performances and evaluate different approaches to the game, and how other countries conduct team selection.

He will learn about the general organisation of international events and bring that knowledge home with him.

On hearing of the win Marosane said: “This is such an honour and I cannot thank Millé enough for giving me this opportunity.  Of all the fantastic coaches at the national final I was the one chosen, I can’t believe it.  I have been coaching BM Mokitime for the past three years and all the hard work has paid off.  Not only will this benefit the school, but I also have my own youth soccer team, Liverpool, and what I learn in France I will introduce to the youngsters there as well. I must admit I am a bit nervous as I have never travelled outside South Africa but at the same time I am very excited.”

The tournament sponsors, Danone, acknowledge that the prize is an extremely valuable gesture from Millé, since providing a local coach with such an experience benefits not just the winning school, but also his surrounding schools and South Africa as a whole.

ABOUT MILLÉ
Millé, is a leader in technical sportswear. Whether you’re practicing running drills or slide tackling your opponent, Millé gear can give you all that you need to stand proud at the end of the day while looking professional.  Millé is prominent for its durability and comfort and has further cemented its place as a leader in sports footwear and apparel. 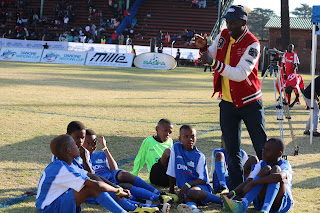 Boy from Musina, who will lead the under-12 team in the Danone Nations Cup world finals in France in October, focuses on mental strength to prepare the team

Benny’s Sports Academy of Tshiozi, a village outside of Louis Trichardt in rural Limpopo, will be travelling to Paris next month to play in the world finals of the Danone Nations Cup against the champion under-12 teams of 31 other nations.

And leading them will be 24 year-old Mbishi Mokwena, the coach who took them to the Limpopo and South African titles in the competition, and the tactician behind their success.

Mokwena has an astute footballing brain on his young shoulders, and he is continually scheming ways to get around the problem that has faced all the South African teams at the Danone Nations Cup world finals: their diminutive stature.

“I have been studying the videos of past world finals tournaments and, frankly, I don’t see much between the soccer played by the other countries and ourselves,” he said. “The only obvious difference is our lack of size.

“I did see, however, that the Brazilians made the third/fourth playoffs in 2014 and finished in 14th position in 2015, with boys as small as ours, so there is no reason why we can’t do well in France.”

Mokwena’s approach is to work on the mental preparation of the boys, building their confidence.

“They must believe in themselves,” he said “They have the talent and it doesn’t matter what facilities the various different countries have, it is talent and tactics that win games.

“We will be going to France as a unit and we need to stay as a unit. We must not assume anyone is better than us. It has been proven many a time that just because a team has better equipment and playing surfaces, it does not mean they will automatically win.”

In preparing for the tournament, he is getting the team to play matches against older teams, so that they aren’t easily intimidated.

“Last year we could quite easily have beaten the eventual champions, Bree Primary, and they ended up in 16th place at the world finals. I use that example to show the boys that we need not be afraid of the opposition we are going to face,” said.

Ambition Delight Mokwena hails from Matswale village in Musina. His great-grandmother called him Mbishi because she could not pronounce the name Ambition. He has a younger brother Abenico, who is 22 years old and is currently studying tourism in at a college in Polokwane and he is also a pastor in training.

The brothers were brought up by their maternal grandmother Leah Mokwena who is a general worker at the Musina Municipality, after their father left when Mbishi was six and his mother died soon afterwards.

He did his primary schooling at Makusha Primary School and Matriculated at Musina High School in 2011 and went on to get a certificate in IT at Scourer Computer & Internet Training College in Louis Trichardt.

He found work in a plastic factory, but his passion was sports development, so in 2012 he started a soccer club in Musina called Mbishi Football Club and, against all odds, they won the Musina Winter Games.

That led to him being approached by Polokwane United Academy to train their junior teams. He soon realised that the kids at the club were being taught soccer, but were not being educated as well, so much to the annoyance of Polokwane United, he took them to Centauri Soccer Academy where they received a better education.

He went with them as coach and in 2014 they won the Department of Education’s SA School Championship, and the Limpopo title of the Sasfa under-13 tournament.

He was spotted there by Benny’s Sports Academy coach, and was offered a position at the school in 2015.

As a great supporter of soccer development, Mbishi knew all about the Danone Nations Cup before he got to the school. So, when the opportunity came in 2015, he knew what they needed to do in terms of training. He managed to get the team through to the national finals for the first time since the school started playing in the tournament but they were knocked out of the semifinals by Bree Primary.

They repeated that feat this year and went one further, winning the national title.

Now they face a greater challenge, in a strange country, thousands of kilometres away from home.

Mbishi Mokwena is aware of the obstacles they face. “We are going to tackle the world finals just like we did the nationals. The players were out of their comfort zone there too, and also came up against schools with better resources that ours,” he said. “We managed to win the title against the odds there. The challenge is to get the players to believe that they can do the same in France. They have the skills, now they need the mental toughness.” 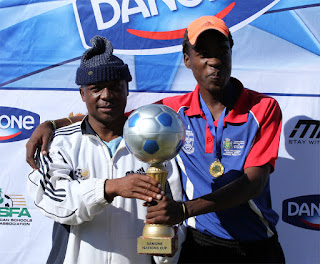