Ronel Louw and Wessel Kemp have emerged as victors of the 2010 KIA Amateur Australian Open National finals which were played at the University of Pretoria from the 26 – 28 November, 2010. Ronel and Wessel will now represent South Africa at the World Finals to be held in Melbourne, Australia, in January 2011.  Ronel is a previous winner of the event having competed in Australia in 2003.
After two days of qualifiers Louw and Kemp reached the finals with the women’s final taking place first.  Louw (47) took on a younger Lisa Van Der Riet (33).  Both players know each other exceptionally well:  “We are great friends and play a practise match against each other every Thursday,” said Louw.  “I did not think I would beat her, but it was my day and I feel so privileged to be going to Australia in January – again!”
It was then up to the men to clinch the deal.  “I had beaten Lisa, but it was now up to Wessel to win so that we were indeed the couple to be going to Australia.  I was very nervous for him as it was a case of the two older ladies competing and the two young coaches.  Wessel Kemp, who was my partner and is my coach and Dawie Eybers, who is Lisa’s coach and partner” said Louw.
The men were 6 games all with Kemp needing one more point to win the set, but the situation was too much for the youngster and he hit the ball into the net to give his opponent another chance.  But Eybers did not make the most of the advantage he was presented with and Kemp did not make the same mistake twice.
Having won both the Men’s and Women’s sets the game did not have to go into mixed doubles and Louw and Kemp are on their way to Australia.
“I compete in the Kia Amateur Australian Open even every year.  I won in 2003 and since then have managed to reach the semifinals once and was even beaten in the Final a couple of years later.  I can’t wait to play in the Kia world finals and then stay on to see the top players competing in the Kia Australian Open.  My favourite player is Roger Federer and I would like to see him in action again,” said an excited Louw.
The couple will be competing against 14 other countries in the Kia Amateur Open Tennis world finals including:  Germany, France, Netherlands, Poland, Sweden, Libya, Jordan, Nigeria, Chile, USA, Korea, Australia, New Zealand, China. All players will then experience a 4-day hospitality package including watching the Australian Open.
In addition to the Kia Amateur Australian Open tournament, Kia Motors is the major sponsor of the Australian Tennis Open – one of four Grand Slam tournaments.
“This sponsorship allows Kia the opportunity to reach many of our target market.  Whereas the players were all from Gauteng this year, next year we are looking to branch out to most of the other provinces,” said Vinola Pillay, Marketing Manager, Kia Motors.
Kemp and Louw beat Dawie Eybers and Lisa van der Riet  2 - 0 in the final.

The quarter final results are in and the winners to be announced on Sunday, 28th November, will each receive an expense paid trip for two to attend the 2011 Australian Open and represent South Africa in the 2011 KIA Amateur Australian Open World Final.
For full event details please contact Lisa Wade: lisa@langazela.co.za or 082 904 1805 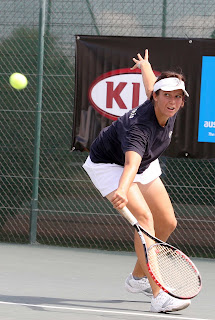 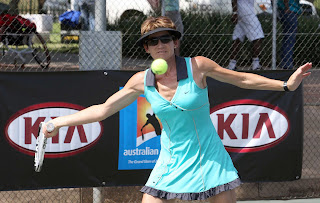 THE FIRST ROUND OF THE KIA AMATEUR AUSTRALIAN OPEN PLAY OFFS

Today is the Start of the Kia Amateur Australian Open where two South Africans will qualify to play in the Amateur Australian Open next year at the same time and venue as the Australian Open.
There are 96 male and female club tennis players that are trying to join the winners of similar qualifying tournaments in Germany, France, Netherlands, Poland, Sweden, Libya, Jordan, Nigeria, Chile, USA, Korea, Australia, New Zealand, China, all countries where Kia have got a strong presence.
The tournament is being played over the weekend at the University of Pretoria and anyone can go along to watch.
The winners will get a 4 day all expenses paid trip to Australia and, if they are lucky like the last South Africans that qualified, they will get tickets to the Australian Open Men’s Final.
at 10:49 AM No comments:

The entries for the 2010 KIA Amateur Australian Open tournament happening at the University of Pretoria, Sports complex this weekend (26 – 28 November) have surpassed expectations with 96 amateur tennis players having registered (48 couples).
The event offers a unique opportunity for amateur tennis players wishing to experience competing on a world stage. The winning male and female from this coming weekend’s tournament will travel to Melbourne, Australia between January 17 and 30, 2011, and will represent South Africa at the Kia Amateur Australian Open World Finals. They will be competing against 15 other countries including:  Germany, France, Netherlands, Poland, Sweden, South Africa, Libya, Jordan, Nigeria, Chile, USA, Korea, Australia, New Zealand, China. All players will then experience a 4-day hospitality package including watching a match.
“The main objective of the tournament is to promote tennis at club level and offer amateur players the opportunity to watch professional tennis,” said Holger Losch, Tournament Director.
The KIA Amateur Australian Open national playoffs will commence on Friday, 26th November at the University of Pretoria with the round of 64. The round of 32 will be followed by 16 and then the quarter finals, on Saturday. The semis and finals will be played on Sunday, 28th November.
The KIA Amateur Australian Open was first played in South Africa in 2003 with Gauteng being the host Province. Between 2004 and 2006 the format changed and other provinces were brought in.
LIST OF ENTRIES: