Zinedine Zidane, the ex Real Madrid player and current Ambassador of the Danone Nations Cup World Final, is a footballer the boys from Barkerville Junior Secondary School will try to emulate as they run onto the pitch of the world renowned Santiago Bernabeu Stadium next weekend when they compete in the 12th edition of the biggest tournament in the world for kids between 10 and 12 years old.


For these boys who come from Mount Frere, a poor rural village near Mthatha, this is the beginning of an experience that will last a life time.  They are completely unfazed by the magnitude of such an occasion:  ”We don’t know much about Spain accept for the big teams from that country like Barcelona and Real Madrid, but we are looking forward to playing on the very same field that Zinedine Zidane played for so many years,” said star midfielder Asivuyise Ndzamela
“I have never seen these boys as confident and excited as they are now,” said Mrs Lwana, team manager and Grade 1 Life Skills and Maths teacher at the school. “We are going well prepared as we have had excellent coaching from the Eastern Cape Football Academy which has done wonders for the players and will just make them better players.
“The youngster’s perspective of the world has grown immensely since winning the Danone Nations Cup,” said team head coach, Mpilo Canga.  “The spotlight is on us and we plan to make South Africans proud next week.”
Sharing the teams’ excitement will be Marvelous Nelwamundo, a grade 10 pupil from Capricorn High school in Polokwane who won the Danone, Canon Kids Reporter competition in July this year.
Marvelous will be accompanying the team to Spain, as a kid reporter documenting the teams’ progress and learning the tricks of the Media trade. The highlight of the trip for Nelwamundo however will undoubtedly be the much coveted press conference when the youngsters get to interview the legendary Zinedine Zidane.  “I love Spanish food and the culture so this trip will be really great for me, but I have to admit that getting to meet Zidane is the best part of it all.” Says an overly excited Nelwamundo.
Since its inception in 2000, the tournament has grown from 8 participating countries to now 40 and South Africa has won the event three times (2003,2007 and 2009) and to date the Danone Nations Cup has touched the lives of over 16 million children around the world. “By bringing healthy food and some good healthy fun together, children learn about life through a shared experience. And to those who get to the World Finals, it is an experience that will undoubtedly become a cherished memory,” says Sandra Dorville, Communications manager of Danone Southern Africa.
The youngsters will get to meet local football legend, Neil Tovey, who will be there to wish them well before they leave on their trip.  He will focus on telling the youngsters not to be competitive but to go out and just enjoy every game they play in.  “The Danone Nations Cup is built on very specific principles which are Humanism, Openness, Proximity and Enthusiasm.”
at 5:11 PM No comments:

Preparations for the Barkerville Junior Secondary School boys that will be participating in the Danone Nations Cup World Finals are going exceptionally well, thanks to the Eastern Cape Department of Sport, Art, Culture and Recreation who has commissioned the coaches from the Eastern Cape Academy of Sport to run training camps to boost their skills.


Barkerville is situated in Mount Frere in the Eastern Cape, a poor rural village that does not have a football field, nets and training gear.  The Boys won the Danone Nations Cup (South Africa) in July and their prize is a trip to Spain from 5th to the 10th October to compete with 39 other countries in a World Final, the biggest football tournament for children between 10 and 12 years old in the world.
Mr Luvuyo Mankanku, a coordinator at the Eastern Cape Academy for Sport has been working with the Barkerville team and is very optimistic about the boys’ chances of doing well in Spain. “From what I’ve seen over the past few weeks that I’ve been working with the boys, I think the team will do well”. Mankanku furthermore believes that a few of the boys have what it takes to pursue a career in football, that is if they get the proper development training: “ Some of these boys have really impressed me and even though they are still at the early stages in their development, with the right systems in place these boys could go far”.
This comes as no surprise to the people of Mount Frere, who have always believed in the sporting talent the region has to offer. “We have always produced top sportsmen in this Alfred Nzo district, Andile Jali is an example, but it is not just restricted to football, we are very strong in most of the sporting codes” says Mpilo Canga, head coach of the Barkerville team. “When we entered the Danone Nations Cup for the first time in 2009 we weren’t merely making up numbers, we always believed we could win.”
That belief has been the driving force behind the team who will be boarding a plane for the first time as they jet off to Spain. As an added motivator the boys will get to play the final day of the tournament at the home ground of Real Madrid, and will get to meet football legend Zinedine Zidane who is the tournaments ambassador.
Since its inception in 2000, the tournament has grown from 8 participating countries to now 40 and South Africa is the only country to win the event three times (2003,2007 and 2009) and to date the Danone Nations Cup has touched the lives of over 16 million children around the world. “By bringing healthy food and some good healthy fun together, children learn about life through a shared experience. And to those who get to the World Finals, it is an experience that will undoubtedly become a cherished memory,” says Sandra Dorville, Communications manager of Danone Southern Africa.
The final training camp will take place in East London at the home of National First Division Club, Blackburn Rovers FC.  There will be eight teams taking part under the guidance of the Eastern Cape Academy for Sports.  “We have invited some of the East London schools to participate which will give the Barkerville team good match practise.  As an Academy we will also be giving the other teams training as well to further boost the sport in the area”, said Mankanku. 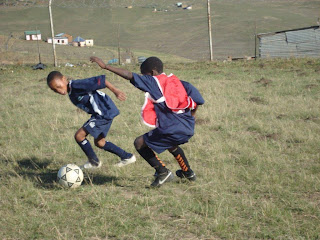 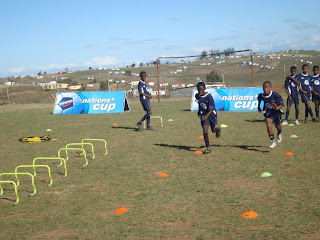 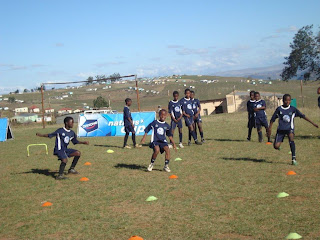 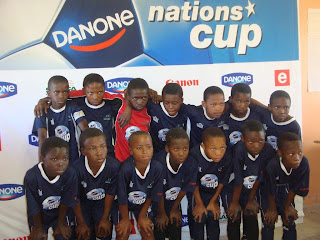 South Africans might not have heard of a little village in the Eastern Cape called Mount Frere, but this changed in July this year when Barkerville Junior Primary School were crowned the Danone Nations Cup champions, winning for themselves a trip to Spain from 5 – 10 October to compete in the Danone Nations Cup World Finals, the biggest tournament for children between 10 and 12 in the World!

Preparations are well underway for this once in a lifetime trip where the team will compete against 39 other nations. The Nelson Mandela Bay Metropolitan has come on board and is running weekly training camps for the youngsters and one player that is relishing this opportunity is 12 year-old striker, Qhamani Mandlevu.
Mandlevu was a contributing factor to the team’s success.  He scored 11 goals in the elimination games and 3 goals in the National Finals.  Barkerville finally beat Kgwahlele Primary School from Limpopo 1 – 0 to win the title.  His coach credits him with having lightning pace, good finishing and is confident with the ball at his feet and will be using him in the starting line-up in Spain.
Orlando Pirates stalwart, Andile Jali, is young Mandlevu’s football hero and role model.  “I love Andile Jali and I recently found out that he is from the Eastern Cape which gives me even more confidence as I know that the Eastern Cape also produces skilled footballers.  He (Jali) has become an inspiration to all of us as we saw how hard he worked and his determination to get to play at the top level of the game and we all want to do the same.”
While Mandlevu undoubtedly has a great love for the beautiful game, his plans extend far beyond soccer: “I would like to study Mechanical Engineering one day and besides football I also love athletics.  Maybe I will be the fastest runner in South Africa one day.”
Mandlevu admitted that life in Mount Frere is not easy.  Being a small town there are not many business opportunities meaning that most people are unemployed.  “If I make it into professional football my first few pay cheques will go towards building a decent house for my family because currently my mother, three siblings and I live in a one bedroom house.”
The upcoming trip to Spain may just be the beginning of a future Mandlevu is currently only dreaming about.  He will be making new friends and creating many fond memories that he will carry for a lifetime, which is the primary objective of the Danone Nations Cup:  “By bringing healthy food and some good healthy fun together, children learn about life through a shared experience. And to those who get to the World Finals, it is an experience that will undoubtedly become a cherished memory,” says Sandra Dorville, Communications manager of Danone Southern Africa.
Walking around the field and watching all teams in action in Spain will be none other than the Danone Nations Cup ambassador, Zinedine Zidane.   This famous French international and FIFA footballer of the Year has been involved with the tournament since its inception in 2000 as he believes in the values upon which the tournament is built.