The prestigious Coca-Cola® Hero of the Day award is presented on each day of the tournament in recognition of a game changing ‘hero’ moment.  Beyers was selected for the award by a Coca-Cola® appointed panel of cricket experts after taking three wickets for 16 runs in 10 overs against home favorites Free State.

In the main match on the final day of the Coca-Cola Khaya Majola Cricket Week, two unbeaten teams, Northerns and Free State, played against each other. Leading into the day there was very little to separate the two teams so it would take something special from someone to raise their game under extreme pressure to give their team an advantage.

Beyers stepped up to the challenge, handled the pressure well and stopped Free State from scoring a defendable total. Amongst his wickets was the highest run scorer of the tournament, Chris Schreuder, whom he bowled out for a duck.

“It was a great final game of the Coca-Cola Khaya Majola Cricket Week, I took the new ball and I was determined to help my team finish off as the only unbeaten team of the tournament. Everything worked well for me and I am really honored to be recognized for my efforts,” said Beyers.

“In a feature match you always need someone to set the tone and be a hero. Beyers Swanepoel did that beautifully with his three wickets, helping Northerns topple a very powerful Free State team,” said retired Proteas player and lead Coca-Cola® Hero of the Day judge, Robin Peterson.

Fetsi Mbele, Coca-Cola Southern & East Africa’s Senior Communications Manager: Brand Experience commented, “The Coca-Cola® Khaya Majola Cricket Week is Where Heroes Are Made. It is fantastic to see such a young man like Beyers rise up to the occasion and perform when it mattered most. On behalf of Coca-Cola I extend my congratulations, I can’t wait to follow his career going forward as he works towards becoming a hero of South African cricket. ” 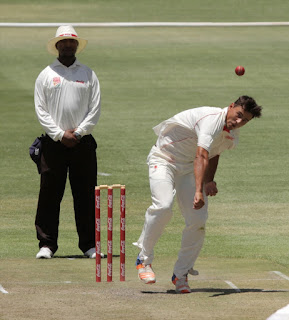 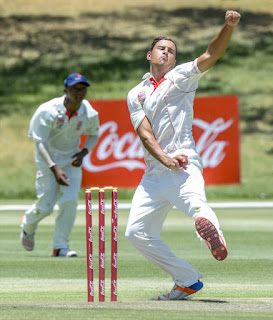 All of the audio and visual clippings of the day can be found on www.csamedia.co.za
There is going to be a new wearer of the unofficial Coca-Cola Khaya Majola Week crown this year after the hosts, Free State, take on Northerns at the Manguang Oval in the week’s main game on Tuesday.

Northerns beat Gauteng quite comfortably on Monday to book their spot in the week’s showcase game. Gauteng made 227/8 in their 50 overs, with Josh Richards getting a century for them.

Northerns, in reply, were never really troubled and they reached the target four wickets down and five overs to spare. Their captain, Joshua Coetzee top-scored with 85, ably assisted by Ruan de Swardt who saw the side home and was still there with 71 not out at the end.

Free State guaranteed their slot when they beat Eastern Province by 64 runs on Monday. They posted a massive 353/3 in their 50 overs, with Christopher Schreuder and Raynard van Tonder both getting centuries.

EP’s Chris Benjamin scored a hundred in the run chase, but he never got enough support and they finished well short.

There were five centuries scored on the day, and 11 in all during the week, showing that the hot and dry conditions in Bloemfontein certainly favoured the batsmen.

With one day to go, that’s just one short of the record of 12 100s at a Khaya Majola Week. There were also a remarkable 38 half centuries scored in the first four days.

The top batsman so far is undoubtedly Free State’s Christopher Schreuder. He made his second 100 on Tuesday – 134 against Eastern Province – to go with his 126 not out against KwaZulu-Natal Inland on Sunday.

On the other hand, there were only four five-wicket hauls in the first four days of the week.

The best figures came from Ruan de Swardt of Northerns who took 5/15 against Limpopo. He is also the top wicket-taker so far.

The Coca-Cola Hero of the Day was Boland’s Sinalo Gobeni, who smashed 96 not out to give his side a victory over Easterns that looked decidedly unlikely when he came to the crease.

By Theo Garrun
My Two Cents
at 3:44 PM No comments:

Email ThisBlogThis!Share to TwitterShare to FacebookShare to Pinterest
Labels: coca-cola hero of the day, Coca-Cola Khaya Majola Week, Cricket South Africa, Intune communications and Entertainment, Where Heroes are made

The prestigious Coca-Cola® Hero of the Day award is presented on each day of the tournament in recognition of a game changing ‘hero’ moment.  Sinalo was selected for the award by a Coca-Cola® appointed panel of cricket experts after hitting 96 runs not out off 61 balls for an unlikely win against Easterns.

Sinalo came in to bat with Boland needing 192 at 8.7 runs an over to win the game. He batted aggressively and with a ‘never say die attitude’ throughout his innings and hit 96 not out, which included hitting 20 runs off the last 7 balls that he faced to win the game for his team.

“Unlike a lot of my team mates, I have not played in the various age group tournaments, so for me it is important to take advantage of any opportunity that Boland gives me. I am proud to have paid Boland back for their faith in me,” said Sinalo.

“There were a lot of possible Hero of the Day moments today, so there had to be an outstanding performance to win the award. I felt that Sinalo was amazing, and to hit 96 not out coming in so low in the batting lineup shows great character and it was a definite hero moment,” said retired Proteas player and lead Coca-Cola® Hero of the Day judge, Robin Peterson.

Fetsi Mbele, Coca-Cola Southern & East Africa’s Senior Communications Manager: Brand Experience commented, “The Coca-Cola® Khaya Majola Cricket Week is Where Heroes Are Made. It is fantastic to see such that a young man like Sinalo show great character and win the match for his team. On behalf of Coca-Cola I extend my congratulations, I can’t wait to follow his career going forward as he works towards becoming a hero of South African cricket. ” 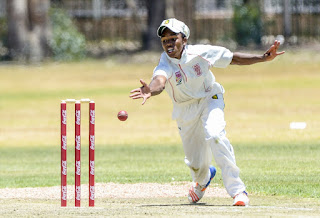 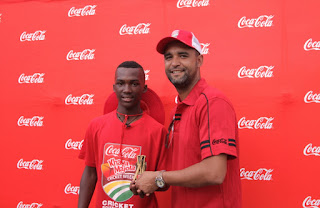