The future of South African football lies in the hands of youth tournaments such as the under-19 Kay Motsepe Schools Cup, sponsored by the Motsepe Foundation and Sanlam.  Players are identified, placed into development programmes and nurtured.  A fine example is Percy Tau.  Mamelodi Sundowns scouts found this young rough diamond, brought him to Tshwane, placed him in Clapham High School, where he played in instrumental part in helping the school win the lucrative tournament, and now competes for both Bafana Bafana and is making waves at Belgian club, Brugge KV.

The possibility of being identified in the 2019 Kay Motsepe Schools Cup is exciting for the young players from Dr JL Dube and Mount Currie High School who will be representing KwaZulu-Natal in the National Finals taking place at the University of the Free State (Kovsies) from 23rd to 27th September.

Dr JL Dube won the KZN provincial finals and the R100 000 that goes with it and automatic qualification to the national finals. The school is in Kwa-Mashu and this is the second time that they have qualified for the nationals.

Coach Nhlanhla Makhwasa is a highly qualified teacher with a passion for helping children reach their potential in a safe, fun-filled environment and football is a perfect activity to do that, he believes, and this is what drove him to take up coaching.
The team is hard at work preparing for the nationals. “We need to remember that we want the boys to become the best players they can possibly be, and the Kay Motsepe Schools Cup creates an environment for them to succeed. We are playing friendly matches with the surroundings clubs to give them the best opportunity to excel at the national finals.
There are three players who Makhwasa believes will be key to them in Bloemfontein. They are Philani Sithebe (midfielder), Langa Mhlongo (midfielder) and Mxolisi Mthiya (striker).
Mount Currie High School, from Kokstad in the Harry Gwala District, came second at the KZN provincial finals and they will also be going to the nationals. The school has been competing since 2012, but this is the first time that they qualified for the national finals

Their coach, Mr John Motsa, started soccer at Mount Currie. Before that there was no sport at the school.  Motsa has a SAFA Introductory level coaching qualification obtained in 2008, a SAFA level one qualification completed in 2011 and CAF A certificate obtained in 2016.  A contributing factor to their success this year is preparation.  “In the past the Kay Motsepe Schools Cup was the only tournament we entered the entire year.  This year we have registered for the local league and we compete in different tournaments.  It has made a huge difference to our performance.  Learning is one of the key elements of success. The game is continuously changing and we need to accept that fact and adapt accordingly.”

The provincial finals were tough, admitted Motsa.  “We competed against some excellent teams, but this is our year and we are ready for the nationals.” The key players that they will be looking to are Benny Makhetha (central striker), Zukisani Ngubane(striker) and Motsa’s son, Sisipho Motsa , who is the goalkeeper and is also the captain.

The national finals promise to be spectacular with 18 teams competing for the ultimate prize of R1million, making the Kay Motsepe Schools Cup, sponsored by the Motsepe Foundation and Sanlam, the competition with the biggest prize money in Africa at under-19 level.  The runners-up will take home R600 000, third place and fourth place finishers get R500 000 and R400 000 respectively.  On top of this the nine Provincial winners will each receive R100 000.  The winnings are not handed over in cash but spent on legacy projects identified by the winning schools. 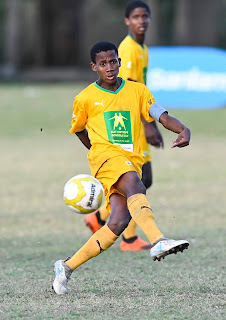 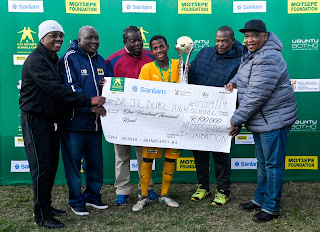 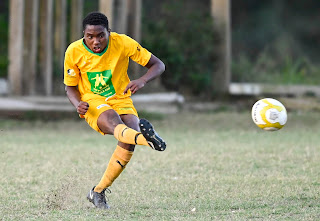 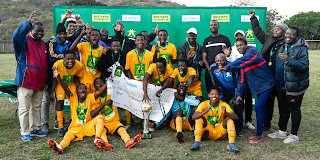 Schools representing Gauteng have done exceptionally well at the under-19 Kay Motsepe Schools Cup national finals over the years and 2019 could well be a repeat of that, with both Rosina Sedibane, the school that the development players from SuperSport United attend, and Clapham High School, where the Mamelodi Sundowns development players are educated, both reaching the national finals.

Rosina Sedibane won the Gauteng provincial title this year, and the R100 000 that goes with it, after beating Clapham High School on penalties in the provincial finals. Both schools will now proceed to the national finals taking place at the University of the Free State on September 23rd to 27th.

Rosina coach, Mpho Motola, is hoping to repeat the school’s success of 2017 and take home the R1 million first prize.

“Rosina has been successful in winning prize money in this highly lucrative competition over the years,” he said.  “We finished 3rd in 2012 and 2013 and 1st in 2017 which has made a huge difference to the upgrading of the school. We have improved the football fields, built a basketball court, and we upgraded the hostels.  Approximately 80% of our pupils board at the school and these facilities need constant upgrading.”

Rosina Sedibane has taken part in the Kay Motsepe Schools Cup, sponsored by the Motsepe Foundation and Sanlam, since the tournament started. Last year they were knocked out in the group stages of the Gauteng Provincial Finals. Depending on how well they do this year, they would like to continue renovating the rest of the hostel, the school library and use some of the money to maintain their football field. “We attract pupils from all over South Africa so over 80% of the 350 learners that attend the school reside in the hostel,” said Motola.

The road to the national finals was not easy, admits Motola.  “We played 11 matches to qualify for the National Finals, including local qualifiers, district playoffs and provincial finals. We drew only 2 of those games, including a 2-2 draw with Clapham in the Gauteng Provincial finals.  We finally won on penalties to reach the nationa.s.”

There hasn’t been much time between the Provincial and National finals so they won’t be able to make big changes to their game plan.  “There are few tweaks that are needed such as improving our conversion rate in front of the goals,” Motola said. “The team gets into positions where they can score, and they are sloppy in their execution. We must be more clinical.

“We also need to work on our physical conditioning. The team will play a lot of games at the national finals without much turnaround time between games, so the boys need to be fit.”

He would also like to boys to distribute the ball a lot better. “They waste a lot of energy when they lose the ball due to incomplete passes. We must up our pass completion rate so we don’t waste energy trying to get the ball back.”
Playing in Gauteng is a big advantage, Motola believes. “A lot of the football academies and top football schools are in Gauteng, so we play against top opposition day in and day out. Some of the other teams in the National Finals are by far the top schools in their areas but are not used to playing against top opposition on a weekly basis.”

Many ex-Rosina players are playing football in the PSL, ABC Motsepe and SAB leagues. The latest star is Kamohelo Mahlatsi who is contracted to Supersport United and the SA under-23s. He is currently on loan to the University of Pretoria FC.
The coach singles out striker Stevens Goovadia as a player to watch. He is aggressive and scores a lot of goals. He was called up to the SA u-20s for a camp but did not go to the All-Africa Games
Itumeleng Legadi, the captain is another. He is a right-back but he can cover for right wing and depending on the situation, he can join the strikers. He has the ability to motivate the other players in the team. He is looked up to by other players.
Coach Mpho Motola has a CAF level B qualification. He has a degree in Psychology but he is so passionate about coaching and developing young talent that he went into teaching. He uses his psychology degree extensively while coaching the boys.
The tournament is run under the auspices of the South African Football Association (SAFA) together with the Department of Basic Education (DBE).

The national finals promise to be spectacular with 18 teams competing for the ultimate prize of R1million, making the Kay Motsepe Schools Cup the competition with the biggest prize money in Africa at under-19 level.  The runners-up will take home R600 000, third place and fourth place finishers get R500 000 and R400 000 respectively.  On top of this the nine Provincial winners will each receive R100 000.  The winnings are not handed over in cash but spent on legacy projects identified by the winning schools. 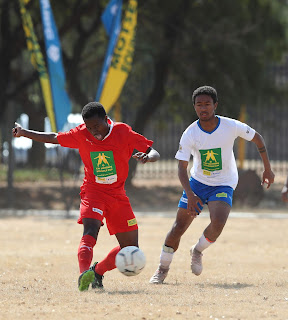 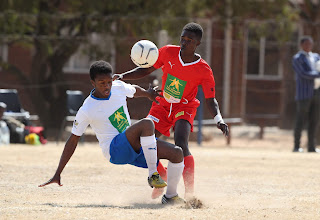 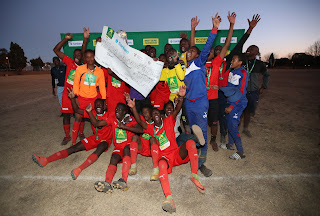 The under-19 Kay Motspe Schools Cup provincial finals are near completion with the North West province being the last to host their finals taking place at the Marikana Sports Ground in Rustenburg on Friday, 20th  September.

There will be four regional finalists competing for the two spots in the National Finals, with the schools that finish first and second automatically qualifying. Thuso Thebe High School (Ganyesa district), Sol Plaatjie (Ngaka Modiri Molema district), Eletsa Secondary School (Madibeng) and Kirang Ka Natla Secondary School (Stilfontein)
Eletsa Secondary School, from the Bojanala district, has been competing in the Kay Motsepe Schools Cup, sponsored by the Motsepe Foundation and Sanlam, since 2010 managing to finish in third place in 2010 and again in 2017.

Manager and coach, Daniel Mhlongo is also a teacher at the school.  His love of the beautiful game spurred him to get his SAFA referee certificate. He went on to get a SAFA Introductory coaching certificate and he manages the Young Zebra Football Team that competes in the ABC Motsepe League, so he is well qualified to get the boys to the national finals again.

Eletsa’s road to the provincial finals was highly successful as they won every game.  At circuit level they beat Michakgasi Secondary 2-0, Klipgat High 1-0, Mchakgasi 2-0 andMadibatoloane 2-0. In the district round they beat Rustenburg High 1-0, Moses Kotwane 2-0, Moretele Secondary 1-0.

“I have an excellent team this year with three of our players - Jabulani Maseko, Moloto Phologelo and Fhurani Evans - being identified by the Mamelodi Sundown scouts,” Mhlongo said. “We will be happy to win the provincials however our plan is to win the Nationals as we would like to take home the prize money to rebuild some of our school structures.”

Eletsa is working hard at preparing for the provincial finals. “We train five times a week and play friendly games within the area,” Mhlongo said. “We all know that it will be a tough competition, but we can’t lose the provincial title.”

The tournament is run under the auspices of the South African Football Association (SAFA) together with the Department of Basic Education (DBE).

The national finals promise to be spectacular with 18 teams competing for the ultimate prize of R1million, making the Kay Motsepe Schools Cup, sponsored by the Motsepe Foundation and Sanlam, the competition with the biggest prize money in Africa at under-19 level.  The runners-up will take home R600 000, third place and fourth place finishers get R500 000 and R400 000 respectively.  On top of this the nine Provincial winners will each receive R100 000.  The winnings are not handed over in cash but spent on legacy projects identified by the winning schools.