The dates for the provincial final tournaments in the South African leg of the world’s biggest under-12 soccer tournament – the Danone Nations Cup - have been announced.

Group Danone, the tournament sponsors, will be celebrating their centenary in 2019 and it’s been announced that the 2018 World Finals, at which the champions from all the competing nations participate, will be held next year together with the 2019 tournament in Spain, where Danone was first established 100 years ago.

This means that the South African Schools Football Association (SASFA), who organise the competition here, have more time to stage their provincial tournaments this year because they don’t have to be finished by early July to begin applying for passports and visas.

SASFA are happy with the extra time as this gives them more time to get registrations in and they want their coordinators to go deep into the rural areas to entice schools to compete.

“The Danone Nation Cup is a key tournament on the SASFA calendar and the prize of an overseas trip to compete in the world finals makes it a popular one,” said SASFA’s tournament director Themba Tshabalala. “This year we are making an extra effort to grow the number of participating schools as we have a lot more time.”

The tournament plays a critical role in childhood development for 12-year-olds as it gives them something to strive for, Tshabalala said. “It is also used by educators as a means of teaching life skills –goal-setting, teamwork, perseverance, and the value of hard work. “An important added benefit is that there is an emphasis on teaching kids how to develop healthy eating habits which will benefit them throughout their lives.”

The Northern Cape province will kick-start the provincial finals on 14th April with Upington the host town again. Final registrations are still coming in, but it’s expected that more than 130 schools will register, and they will begin their cluster level games in the first week of March. Bankhara Bodulong Primary School represented the province at last year’s national finals, and they already have their entry in for this year’s competition.

South Africa has been competing in the Danone Nations Cup since its inception in 2000 and is one of only 2 countries that has won the tournament 3 times (2003,2007 and 2009). The other country being France.

The dates and venues of the 2018 Provincial Finals are:

The National Finals will be in Gauteng on 15th September, at a venue still to be announced.

Schools can still register for the competition by contacting the national coordinator at the SA Schools Football Association (SASFA), Themba Tshabalala, on 011 403 2844, 084 290 0602 or 072 588 4957. Alternatively, they can visit the Danone Nations Cup South Africa Facebook page or go to www.facebook.com/dncsouthafrica to download the necessary documents. (Documents are always on Danone.co.za also)

Cape Town-based Rondebosch Boys High and St Albans College from Pretoria have qualified to represent the Cobras and Titans at the Coca-Cola Schools T20 Challenge National Finals in March.

Rondebosch took on Outeniqua High School and Paul Roos Gymnasium in the Cobras Coca-Cola Schools T20 Challenge Franchise Finals at their home ground on Saturday, 23 January 2018. Outeniqua Paul Roos were no match for a well drilled Rondebosch team who had stand out performances by Reese Scheepers with the ball, Justin Broad and Quinton Oordt with the bat, and their wicket keeper Ethan Nates who made 3 stumpings and 2 runouts.

Marais Viljoen won the toss and decided to bat first. The opening partnership of Neil Bothma (33 off 13 balls) and Liam Murphy (30 off 16 balls) got them off to a fast start. At one stage they had 62 runs off 5 overs. St Albans did not let the fast start get to them and started taking wickets at short intervals. Marais Viljoen only managed to add another 74 runs in the next 15 over to post 136/7. Like Marais Viljoen, St Albans openers got them off to a good start and chased down 137 to win in in 15.4 overs with the loss of only 3 wickets.

During the two franchise finals, four players were selected to be part of the Coca-Cola T20 All-Star Team to take on the Cricket South Africa Development team at national finals. The new addition of the Coca-Cola Schools T20 Challenge is aimed at spreading the talent search net wider and will see a team of cricket experts attend all franchise finals in search of outstanding players in the teams that do not qualify for the national finals.

Outeniqua's all-rounder, Matthew Thorn's and Paul Roos’ batsman, Rudi Klaasen were selected during the Cobras Franchise Finals. Thorn’s performance with bat and ball and Klaasen’s batting display throughout the day impressed the Coca-Cola T20 All-Star selectors, earning them a spot in the team.

“I have mixed emotions today, on the one hand I am very happy that I was picked for the All-Star team but on the other hand I would have loved it if my school had qualified for the National Finals. It is now up to me to represent my school in a curtain-raiser at the Coca-Cola Schools T20 Challenge Finals," said Matthew Thorn.

During the Titans Franchise Finals, Neil Bothma and Khaya Nyamathe from Marais Viljoen were selected for the Coca-Cola T20 All-Star team.

"It is a real honour to be picked to play in the Coca-Cola T20All-Star team. I am disappointed that we lost today but I am happy that cricket won the day," said Khaya Nyamathe.

To engage with the tournament online, search #WhereHeroesAreMade on Twitter or visit @CocaCola_ZA and @OfficialCSA 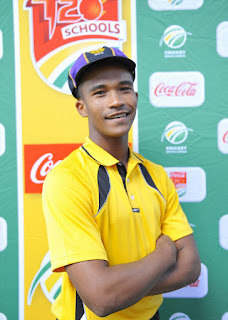 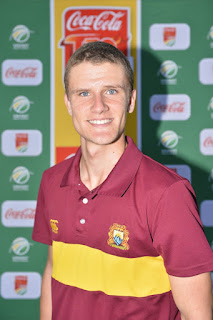 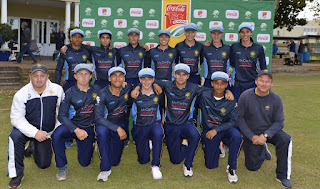 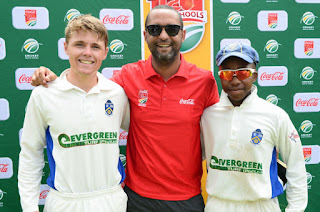 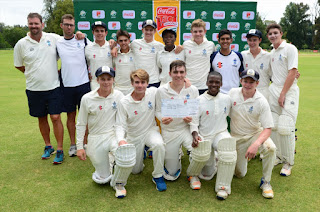 The kids won the toss and decided to field first and were confident that they could chase down whatever score the Proteas could put up. The Proteas batting pack of Tarbriz Shamsi, David Miller and Lara Goodall took on the challenge and managed to get an impressive 52 runs off their 8 overs, which required for the kids to dig deep if they were to win.

The start of the second innings saw KFC Mini-Cricket kids get 15 runs on the board after 4 overs. It was the brilliant partnership of McAlestaire Brown and Mondre Whittles that picked some runs for the kids, it was however not to be as the kids only managed to score 51 runs after 8 overs, one run short of the Proteas 52.

KFC Mini-Cricket fast bowler, Nasji Eksteeen, was the most outstanding player on the day, taking 2 wickets for 5 runs, which ultimately won him the KFC Mini-Cricket Man of the Match award.

Proteas batsman, Farhaan Behardien, said, “We had a great day at PPC Newlands Cricket Ground with the KFC Mini-Cricket Kids today. The match was very close, but we’re relived to have won the match and still have the chance to take the series. We look forward to taking on the next KFC Mini-Cricket team in the season decider match.”

“Today was another amazing match in the KFC Mini-Cricket Kids vs Proteas Tour. There was so much energy on the field and the kids had a lot of support from all the other schools in attendance. It's great to watch the kids play against their heroes. Congratulations to the Proteas for winning today. They were outstanding and brought great spirit to the game. They really make playing cricket exciting for the kids," said Graeme Smith, Former Proteas captain and KFC Mini-Cricket assistant coach.

One spot is still up for grabs and schools or cricket clubs can stand a chance to take on the Proteas in the KFC Mini-Cricket Kids vs Proteas Tour, by simply dialling *120*7535# or visiting www.kfc.co.za/minicricket now to enter!