The prestigious Coca-Cola Hero of the Day award is presented on each day of the tournament in recognition of a game changing ‘hero’ moment.  Akhona was selected for the award by a Coca-Cola appointed panel of cricket experts after he bowled brilliantly to defend 6 runs in the last over of the match in Hudson Park’s semi-final against Wynberg High school (representing the Cobras).

“Winning the award means a lot to me because I knew that I needed to do something to give back to the team and get them into the final. I didn’t do it to win any awards, but I am happy that my effort helped the team win the match and that it was recognized by the panel,” said Akhona.

“I think that Akhona has been outstanding with the ball for Hudson Park during the tournament. Good death bowling is a quality that we look for in our South African cricketing heroes and I hope that it will help in preparation for the rest of his career ,” said Coca-Cola Hero of the Day lead judge Robin Peterson.

Fetsi Mbele, Coca-Cola Southern & East Africa’s Senior Communications Manager: Brand Experience commented, “The Coca-Cola Schools T20 Challenge is Where Heroes Are Made.  For Akhona this is hopefully just the beginning of a future in the game.  On behalf of Coca-Cola I extend my congratulations, I can’t wait to follow his career going forward as he works towards becoming a hero of South African cricket. ” 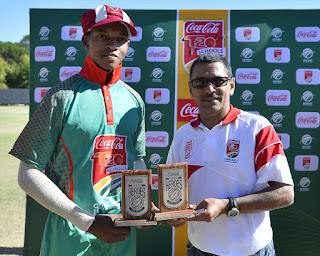 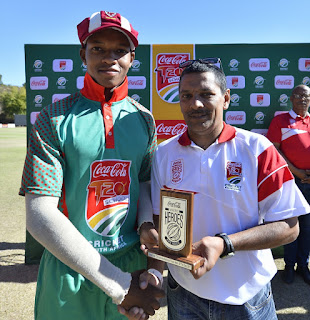 Kimberley’s Roodepan Primary School is the first team to go through to this year’s under-12 Danone Nations Cup national football finals after winning the Northern Cape provincial final last weekend.

The Northern Cape finals took place in Upington and Roodepan beat Bankhara Bodulong Primary School 3-2 on penalties after the final was locked on 1-all at the end of normal time.

Roodepan coach, Enrico Chapman said there was a tense moment in the final match when they went 1-0 down and, after winning all their league games, they found themselves facing defeat in the final minutes of the game. Then Graham Davids managed to score the equalizer and take them into the penalty shootout.

Bankhara Bodulong did very well for a school that was in the provincials for the first time. They were very organised and communicated well on the field, Chapman said.

“My players were determined to win through to the nationals, though,” he said. “The extra hours of practise we put in the week before the finals paid off and all the mistakes we identified during the regionals were corrected.”

There is still a lot of work that needs to be done prior to the nationals, Chapman said, and they have 3 months now to get right.

“I will be organising practice matches against other schools in the Frances Baard region as well as games against older players - under-13 and under-14s. That will give us an opportunity to polish our skills and techniques.”

They will be approaching the Northern Cape Sports Council to help in getting the players into good shape and help them with their eating plans to ensure that they are physically prepared for the national finals.

“In the meantime, I’ll be monitoring the competition on the Danone Nations Cup Facebook page to see who we’ll be facing in the nationals.”

Chapman believes it’s about time that a school from the Northern Cape wins the national final and goes through to the Danone Nations Cup world finals.

“I know it won’t be easy as the bigger provinces have better facilities and better coaching than us. However, soccer is also a game of luck and it is the team with the most goals at the end of the game that wins. So, building up our strike force will be the key.”

In that regard, he believes he has an ace up his sleeve in Graham Davids who is an exceptional player. “This is his second year in the competition. He played last year as a midfielder and he scored 3 goals last weekend including the equalising goal against Bankhara-Bodulong in the final match.

“He improved greatly in the last few years. He is a hard worker and is always willing to learn. He plays well under pressure and is a great motivator.”

Free State will host the next provincial final which will take place after the Easter holidays at Grey College on 22 April. 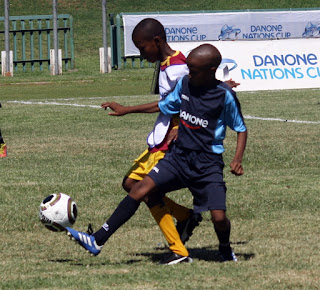 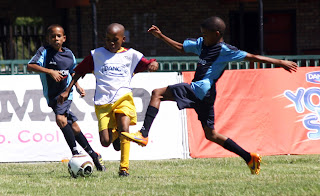 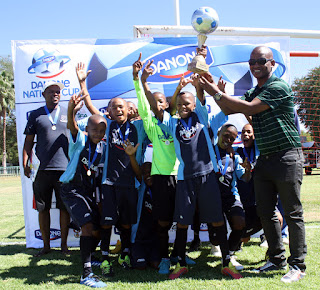 Matthew Erasmus from St Stithians College (representatives of the Bizhub Highveld Lions) has been named the Coca-Cola Hero of the Day for day 2 of the Coca-Cola Schools T20 Challenge.

The prestigious Coca-Cola Hero of the Day award is presented on each day of the tournament in recognition of a game changing ‘hero’ moment.  Matthew was selected for the award by a Coca-Cola appointed panel of cricket experts after he hit the first century of the tournament this year scoring an amazing 105 in his match against Selborne College (Warriors representatives).

“To win the award is very emotional for me. Last year I was a reserve for the entire tournament, I only got two opportunities and that was batting 8th.  For me to get a chance and to be chosen as the Coca-Cola hero of the Day is a dream come true and something that I am very proud of being part of,’” said Matthew.

“Anytime someone gets a hundred in a T20 match it is a special effort and it is not something that you see often in this format. All the best for him for the rest of the tournament,” said Coca-Cola Hero of the Day lead judge Robin Peterson.

Matthew is now in line for the accolade of Coca-Cola Hero of the Tournament which will be announced on the 26th March 2017.

Fetsi Mbele, Coca-Cola Southern & East Africa’s Senior Communications Manager: Brand Experience commented, “The Coca-Cola Khaya Majola Cricket Week is Where Heroes Are Made.  For Matthew this is hopefully just the beginning of a future in the game.  On behalf of Coca-Cola I extend my congratulations, I can’t wait to follow his career going forward as he works towards becoming a hero of South African cricket. ” 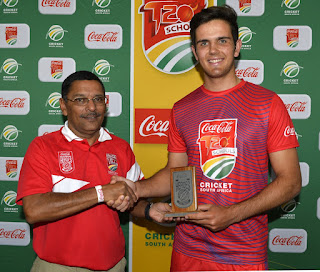 ABOUT THE COCA-COLA COMPANY
The Coca-Cola Company (NYSE: KO) is the world's largest beverage company, refreshing consumers with more than 500 sparkling and still brands.  Led by Coca-Cola, one of the world's most valuable and recognizable brands, our Company's portfolio features 20 billion-dollar brands including Diet Coke, Fanta, Sprite, Coca-Cola Zero, vitaminwater, Powerade, Minute Maid, Simply, Georgia and Del Valle.  Globally, we are the No. 1 provider of sparkling beverages, ready-to-drink coffees, and juices and juice drinks.  Through the world's largest beverage distribution system, consumers in more than 200 countries enjoy our beverages at a rate of 1.9 billion servings a day.  With an enduring commitment to building sustainable communities, our Company is focused on initiatives that reduce our environmental footprint, support active, healthy living, create a safe, inclusive work environment for our associates, and enhance the economic development of the communities where we operate.  Together with our bottling partners, we rank among the world's top 10 private employers with more than 700,000 system associates.  For more information, visit Coca-Cola Journey at www.coca-colacompany.com, follow us on Twitter at twitter.com/CocaColaCo, visit our blog, Coca‑Cola Unbottled, at www.coca-colablog.com or find us on LinkedIn at www.linkedin.com/company/the-coca-cola-company.